Penny is horrified when Amy gives her a gift: a huge, quite horrible painting of the two of them. With no good way to avoid displaying it, she only hangs it up when Amy is over. When Amy catches her taking the painting down, she’s embarrassed and angry until Penny lies and says the gift made Bernadette jealous. When the deranged Professor Rothman is forced to retire, both Sheldon and Kripke vie for his office. President Siebert refuses to resolve the dispute, so Leonard arranges a one-on-one basketball game to decide (since they’re both equally bad at sports). Neither one can even make a single basket, so they end up deciding by seeing who can bounce the ball the highest. Sheldon wins; unfortunately, the office is not what he’d hoped for: the thermostat is located in the office of a professor going through the hot flashes of menopause (thus Sheldon is too cold), the mockingbird outside his window is off-key with the annoying windchimes, the perpetually naked Professor Rothman refuses to vacate, and the Geology Department upstairs makes too much noise. Finally, Sheldon gets his head stuck in the wall in an existing hole, after which Leonard takes his picture before he goes for help. 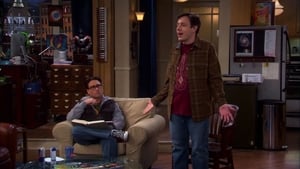